Through My Eyes: Challenges Of The Visually Impaired

By Ruth Cowan
5683
0
Share:
Job hunting is not always the easiest thing in the world. Even with a college degree and experience, landing a great job can be competitive. Putting your best foot forward and selling yourself to future employers is a great way to get their attention. It sets yourself apart from the competition.
I am in my last year of school. After such a long time, I have almost completed my Bachelor’s degree. I am an inducted member of three different honor societies, and if all goes as planned, I will graduate Summa Cum Laude. I have already gained experience from an internship, which is a plus on my resume. I have high expectations or myself and strive for excellence. Would you hire me?
What if I told you I was visually impaired? Would that make you think differently about me? Would that make you think I could not do the job because of my vision? Unfortunately, this is an issue I have faced along with many others. For some reason, there seems to be a real misconception about the abilities of someone with a visual impairment.
I know what I am capable of. I am intelligent, hardworking, as I mentioned above, I strive for excellence. Being a more “experienced” adult, I have raised six kids and enjoy spending time with and babysitting my grandchildren. I have traveled, I am adventurous and as stubborn as a mule. This is who I am. My vision impairment isn’t. Because I don’t see well doesn’t mean I am not capable, yet so many people don’t seem to understand that.
There are so many intelligent and talented people around the world who happened to have a visual impairment. I have had the pleasure of being able to interview a couple of them. As it is with me, their visual impairment is only a small part of who they are. So many see the visual impairment as their identity rather than their character and strengths. 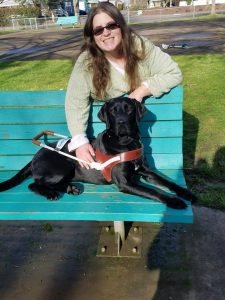 Take, for instance, Andrea Barnhurst. Andrea is an Architectural Computer Aided Drafter by trade. She is also a blog writer, a treasurer of the PTA, and spreads Christmas cheer by playing Mrs. Claus each year. She is articulate, intelligent, and very personable. She is also visually impaired. She is “completely blind in one eye, and 20/150 (in the perfect light) with blind spots in my central vision and upper vision.”

When asked what the biggest challenges she faced when looking for a job she told me that, “The biggest challenges have been with finding the job that doesn’t require you to drive, or that works the hours I need to prevent eye fatigue.” She shared that one of the biggest issues was, “finding an employer who will give me a chance.” Declan Ryan’s story is no different. 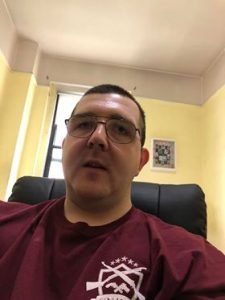 Declan dreams of one day becoming a New York City Firefighter or joining the U.S. military. Unfortunately, with his visual impairment, this dream is on hold, but he continues to educate himself. With the advancement in medicine, anything is possible.

“I still try to continue my education of firefighting so that way I have that knowledge when the day comes, I am able to finally live out my dream job,” Declan shared with such a positive attitude. Although he cannot have his dream job now, he is still looking for employment to support himself.

Declan is also active in charities that support disabled American veterans. He is athletic and runs in marathons and is passionate about target shooting. Yes, you read that right, shooting. One may not think someone with a visual impairment could participate in a sport like this, but Declan shared that, “Contrary to popular belief target shooting is one of the most adaptable sports the visually impaired can participate in.” A visual impairment doesn’t stop those with it from doing things they love, nor does it make them incapable of doing those things.

The misconception that someone with a visual impairment is incapable of working, or they lack the intelligence to hold down a job is ridiculous. While there are challenges those face due to their visual impairment, one of them should not be finding a job.  Both Andrea and Declan are highly intelligent, well-spoken individuals who would more than benefit any organization they worked for.

Unfortunately, some employers have not had enough education and awareness about hiring the visually impaired. If given the opportunity, Andrea would tell a future employer she is, “I am a very career-oriented individual who is a hard worker.  I have learned from prior weaknesses and turned them into strengths with technology and knowledge.”

She would share she is, “Very active in my community, which has allowed me to work with many different people.  I am fluent on the computer, on my different programs, including Microsoft Suites.” She is a fast learner and, “has the ability to multi-task in a fast-pasted environment using many different pieces of office equipment.”

When looking at her skills and abilities, it amazes me how an employer can’t see past his or her misconceptions to see what an asset she would be to an organization. Declan has his own set of skills and abilities that would be of great benefit to any employer. “My strengths while working include, never calling in sick, being a team player, flexible with all work schedules and that I bring lifesaving skills to the table that not most have,” he told me.

Neither of them has allowed their visual impairment to impede pursuing their goals in life whether career based or personal. Each has a different way of approaching their challenges, but also maintain a level of positivity that enables them to achieve their goals. I believe the lack of trying causes one’s limitations. Anything is possible if you set your mind to it.

So far in my series, I have focused on those with disabilities, but to be fair, I thought it was essential to get a view from the other side. I thought getting an open and honest opinion from an employer would help those with a visual impairment understand where they may be coming from, and why they make the decisions they do.

Matt is a Facilities Manager who is responsible for “managing 70 bank branches and all that goes along with the maintenance it takes to keep them up.”  While his opinion is that he wouldn’t discriminate based on visual impairment, “I believe that not all jobs are for everyone. Someone with a visual impairment may have skills in a specific area that does not require the complete use of one’s vision.”

He continued by saying, “When I am interviewing for a position, I look to see if the individual’s skill set matches that of the job they are applying for. For these types of positions complete vision is very necessary not only for the type of work involved but also for safety.”

I hate being told I “can’t” do something, but I also know my limits due to my visual impairment. I wouldn’t interview for a driver’s job or a cashier at a retail store. I know based on my vision, these jobs wouldn’t work for me. Matt made a valid point.

What about the jobs the visually impaired apply for that are within their skills and abilities? Matt has a rare view on hiring those with disabilities; he should, after all, he is my brother and knows me and my capabilities. Most employers don’t, that’s why education and awareness is so important

I don’t want to think I spent so much time and money to get a good education only to be told that I am not good enough. Therefore, this series of articles is so important to me. Knowledge is power and education erases prejudices and stereotypes involving the disabled. Until we can spread more awareness, nothing will change.