From Clodhoppers To Satin Slippers

It was early Monday morning. My mom, Geree, and I were having coffee. Our favorite spot was the little coffee shop several blocks away from her assisted living community. The air was bright and cool for a fall morning in Houston, so we sat at a small outside table. Mom’s cheeks were rosy and complemented the pink sweater she wore.

“I found the photograph you were looking for,” I said as I sipped my mocha latte.

Her eyes lit up, and she smiled. “Thank goodness. I thought it was lost forever.”

I pulled the 35-year-old photo from my purse and handed it to her. It was nestled in front of a piece of cardboard inside a plastic sandwich bag. “Ohhh.” She let out a breath as she studied the photo of her in a pink ballgown and my father in his black tuxedo. A single tear drop rolled down her cheek.

“When I was a little girl, I saw pictures of beautiful ballroom dancers. And just like other little girls, I wished I could do that, too,” she said. “I longed to trade my feed-sack dresses and clunky brown oxfords for the elegant gowns and dainty shoes. The women looked like princesses.”

Years later, when she was married to the man of her dreams, she had the chance to achieve that wish.

She and her husband Harry (my father), lived in Linthicum, Maryland. It’s a small suburban community south of Baltimore city. They raised me and my sister in a colonial style two-story house on Greentree Road. They were in their 50s when my sister and I ventured out to start our own lives.

“After you two left home, we wanted to find new hobbies that would be fun—hobbies we could do together. One evening, while scanning the Maryland Gazette, we came across an ad for ballroom dance lessons. So, we registered for the class. The funny thing is, I got cold feet when it came time to attend the first lesson. I was worried that I would look too awkward at my age, since I had never been on a dance floor. I wanted to stay home, but your dad wouldn’t let me back out.” She laughed. “‘We’ve paid our money,’ he told me. ‘We’re going.’”

“As it turned out, the class that evening was great fun,” she admitted. “So, we continued to go every Friday night. We were hooked!”

The teacher, she noted, had been a dance instructor for the cadets in Officer Training School at West Point. But he had to give up teaching because of health issues. So, they started lessons at the Towson Dance Studio, located just north of Baltimore. Their new teacher was an award-winning dancer and wanted his students to participate in dance competitions.

“After we took lessons for about a year, he thought Harry and I were advanced enough to compete, so we agreed to give it a try,” Mom said. “We added new dance patterns to our repertoire, including the cha-cha, waltz, rumba, tango, polka, quickstep, and others.”

The ballroom dancing competitions were divided into five categories—bronze, silver, gold, pre-champion, and champion—for each style of dance. As dancers progressed, they moved up in the competition categories. Competition attire for men was a black tuxedo with tails and patent-leather dance shoes. Women wore elegant, custom-made gowns. The style of dress worn depended on the type of dance.

“My first costume was a floor-length pink satin ballgown that I wore to dance in waltz competitions. It was trimmed with sequins and soft pink feathers. I wore pink satin dance pumps with it. Later I added a Latin-style dress to my collection of dance costumes.”

Latin dresses, she pointed out, are worn when dancing the cha-cha, rumba, tango, and paso doble. These dresses are styled to be form fitting and sultry, with shorter skirts cut to expose the dancer’s legs. Ballroom dancers also wear special shoes made with soles similar to ballet shoes to help prevent slips and falls. Women and men carry their dance shoes in special cases and wear them on the dance floor only.

“Harry and I became part of the Towson Dance Studio’s competitive team, which included nine other couples. The competitions were sponsored by various competitive ballroom dancing associations and held once or twice a month throughout the year.”

I nodded. “I remember you and Dad driving up to Cherry Hill, New Jersey.”

“Oh yes,” she went on. “We would drive to New Jersey on a Friday night. It was about a four-hour drive. We’d compete all day Saturday, and then drive home on Sunday. Couples came from all over the country to participate. We would typically compete against a dozen other couples for the particular dance we were performing. Their ages ranged from the mid-20s to mid-70s.”

Although dancing in competitions was a lot of fun, she said, it also required a lot of practice as well as stamina. My parents continued to take lessons weekly, but also remodeled their basement to resemble a small dance studio. Full-length mirrors filled one wall, and they practiced daily at home. They also did strength training at the local gym.

“At first Harry and I competed with our instructors as partners. We won bronze medals dancing the waltz, cha-cha, rumba, fox trot, and swing with our instructors. Soon after that, we were ready to compete as a couple. We won many more bronze medals, then advanced to the silver category, where we started winning silver medals. It wasn’t long before we had a bucketful of medals!” She grinned at the memory. “The judges called us the ‘little couple’ because we were always the shortest ones on the dance floor.”

She recalled that one of their greatest moments in the competitive realm of ballroom dancing was the day they won two gold medals—one for dancing the waltz and one for dancing the paso doble. That was their last competition. Soon afterward, my dad was diagnosed with heart disease and scheduled for open-heart surgery.

For his health, the doctor encouraged Harry to move to a warmer, more temperate climate. They left Maryland and moved to Ocala, Florida. Although my parents had to stop competing, they didn’t stop dancing. A young dance professional, the Junior Ballroom Champion in England, taught classes in southern Florida. He also traveled to Ocala one day a week to teach. Harry and Geree started taking ballroom dancing lessons again.

About a year after they left for Ocala, my parents moved into Ocala Palms, a retirement community that was their home for the next 22 years. On their first night in the new house, the Ocala Palms community held a dance at its clubhouse.

“We jumped at the chance to attend,” Mom said. “The music playing that evening included many of our big band favorites, and we had the opportunity to dance the quickstep. Afterwards, we were asked by some of the Ocala Palms residents if we would start a dance class. We were honored, but explained that we were not trained as teachers. We just loved to dance. They wanted us to share our skills anyway, so we volunteered to teach a class.”

At the Ocala Palms community clubhouse, my parents held a ballroom dancing class and residents attended free of charge. The class became very popular, with a dozen or more couples in the class for each lesson. Harry and Geree taught the waltz, cha-cha, rumba, fox trot, tango, and swing.

“One of our best memories was helping a father learn how to dance a waltz. He wanted to surprise his daughter when he shared the first dance with her at her wedding,” my Mom said, smiling. “They were both very thrilled.”

Some of the couples in the class progressed and were eager to show off their new-found ballroom dancing skills. In response, my parents formed a dance group that performed ballroom dancing exhibitions for the Ocala Palms community. They danced at other venues as well, such as area nursing homes, assisted living facilities, and rehabilitation centers.

“We didn’t plan to teach the class for very long, you know. But your dad and I ended up leading the ballroom dancing class in Ocala Palms for 17 years. And we enjoyed every minute of it.”

When he was in his late 70s, my father was diagnosed with lung cancer, which required extensive surgery. His illness brought my parents’ dancing career to a close. Trips to the dance studio became trips to doctors’ offices and hospitals. They packed away his tuxedo and stored my mother’s dance costumes. Not long afterward, Harry succumbed to his battle with cancer. Geree not only lost her dance partner—she lost her best friend.

“I still have that pink ballgown,” she commented as we took our last sip of coffee that morning. “Every now and then I’ll pull it out and reminisce about my journey from that little girl in clodhoppers to a ballroom dancer in a beautiful pink gown and satin slippers, and how I was floated elegantly around the dance floor with the most handsome man in the world.” 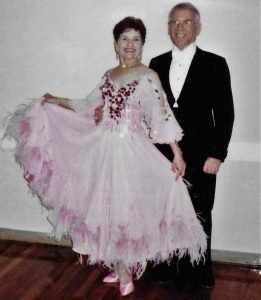 Harry and Geree, the “little couple.”

We drained our coffee cups and rode back to her apartment in silence. She cradled the photograph in her lap and lightly traced the outlines of her and my father with her index finger. Harry and Geree, the “little couple,” smiled back. That one moment captured their love for each other and their joy of dancing together. But the memory will last a lifetime.

Allorianna Matsourani grew up on the East Coast of the United States near Annapolis, Maryland, and has been a writer at heart since she wrote her first fantasy fiction short story at age 12. She attended journalism school at the University of Maryland and directed her writing efforts toward nonfiction articles for newspapers and magazines. Most recently Allorianna was the editor of a business-to-business magazine for the oil and gas industry. An avid reader and fan of science fiction, fantasy, and mystery novels, Allorianna has spent the past several years refocusing her writing on fiction.