HomeTravelPoliticsTechnologyEntertainmentMediaCreativityEnvironmentFamilyHealthRelationshipsMemories
Home›Home›Why Take A Chance On Uncertain Weather? You Never Know Where The Road Will Lead You.

Why Take A Chance On Uncertain Weather? You Never Know Where The Road Will Lead You.

PERTAINS TO MENTAL ILLNESS AND FORMS OF ABUSE

I sit here in the computer room of my low-income apartment. Walls painted off-white makes it easy to turn my attention to the single window to my left. All I see are gray clouds and snowflakes. The wind blows them in different directions before they settle over the icy ground. It looks like I will miss another therapist appointment. My husband will force himself to drive on the slick roads to work; I pray he does not spin off the road or into someone.

As I watch the wind and the snow dance, I cannot help to think about my icy roads, safe roads, detours, and roads not taken. What would have happened if the weather was different?

Safe roads, you know nothing can go wrong that is life-changing. I stayed on this instead of taking the highway to Lincoln Land Community College. I could have hit it big as a music manager. All those hot rock-n-roll superstars? Yeah, I manage them. Nope, I stayed working after high school at County Market. Why take the chance on uncertain weather?

I took a stormy detour. Met a boy, got engaged, found out he was doing drugs and sleeping around. I got off that road and back onto a safe one quick. It was not long after the sky cleared up, and I got a house out of the relationship, well, the bank and me. I bought my grandparents’ home.

It was a year of safe roads and clear skies. Nice warm weather in the summer. Cool breezes in the spring and fall. Then it happened, another detour in ninety-eight. My car was driving fast, and before I realized it, I said yes to a marriage proposal. I loved him, at least I thought I did. Little did I know the detour was long and rocky. I ignored the forecast of tornados and life threating snow and freezing storms. My car crashed and burned, taking me with it.

A few months into this detour of a marriage, I found out my husband was an alcoholic. He always came home drunk. When he was drinking, I got it. I got caught up in an abuse tornado. It spun me from sexual to mental to physical to emotional and back again. The whirlwind was not alone.

I found out he was telling women who did not know me I was his sister, and to those that did, he told them we had an open marriage. He would come home and tell me if I refused him sexually, he would pass me around to his friends. Or, he would threaten to tie me up and would force me to watch him have sex with other women in our bed. This tornado was turning into an F4.

We talked about the open marriage, and for the sake of our holy matrimony, I told him I would try. We met a couple, but they knew, off the storm radar, I did not want to do it. I could not do it. It is not like I am against those who have an open marriage. It works for them, but not me. That upgraded the abuse tornado to an F5.

To make a long, slick, road short. A few months before dissolving the wintry mix of a marriage. I leaned over something to reach for a suitcase. I felt his steel-toe work boot hitting full force on the lower left side of my back.

I got my car back, and I found a safe road in 2002, but inside me was different. A storm was brewing. I knew the route was safe, but I could not help feeling it wasn’t. Something was off, gray clouds loomed.

In the fall of 2002, I met Bruce. I was scared but felt safe around him. We dated and, again, I drove my car fast. It was not long we were living together, but an impending storm lingered. I saw HIM, my ex, everywhere. He called one day, threaten Bruce, saying he had a gun under his truck seat.

I found out my ex-husband knew everything about my new life, about Bruce, when I went out, and when I was working.  People in town were talking to him, telling him. I was getting hit by a hailstorm. I had people telling me my ex was great and I should have done what he wanted me to do. One person told me, “Don’t knock it until you try it.” I turned my back on them. I also lost my grandparent’s home to foreclosure because he did not pay the mortgage.

Bruce Wells and Tracie Hicks on their wedding day on Halloween 2004. Tracie’s sister, Leanna Kalka, took the photo. The “Man in Black” is their brother, Phil Hawkins French.

Then one day, living in my dad’s home, outside, the skies were blue with white, animal-shaped clouds gliding by. Bruce and I got married on Halloween 2004. I was happy but sad. I felt out of place among my friends and family. Not Bruce, he never made me feel alone.

Inside me, the storm was growing. The pain in my lower back intensified. I went from driving the long, safe road with a full-time job to pulling off to dead-end jobs, and, at times, stalling in-between.

The storm hit, and it hit hard. I curled up in bed, and there is where I stayed. I wanted no one around me. The vines grew, entombing me in their thorny embrace muting my voice. I fought, and when I saw the blue sky, I saw my husband get a good job with great pay. We moved out of my dad’s home into our home, once again homeowners. Roads and great weather awaited us.

I was working part-time when the rocks fell from the mountain onto the road. Bruce got injured at work. He lost his job, we sued, and all we got was a used vehicle to replace the repossessed one. I quit my job and took care of him. We could not pay the mortgage (yes, the house got repossessed), light bill, and all other bills.

The road cleared when he got better. I got a temp job that allowed me to get an apartment. A few months later Bruce joined me, and I got study work at Kroger, which was once County Market.

It was not long before the inner storm lashed out and flooded the roads. The water rose and engulfed my car. I, caught inside, drowned in the overflow of depression, PTSD, social anxiety, maladaptive daydreaming, and increased pain in my lower back. I clawed at the seats and doors to find a way out but found none.

Bruce braved the storm and found the wreckage. He sought help, and a tow-truck (Kendra) from Springfield, Illinois, answered his cry. With the change in income, it forced us to move into low-income apartments, and she wrote a note for my two cats. I needed them for therapy.

When I thought the flood receded, it came back full force, trapping me in my car. There were a few inches between the top of the car and the water where I swam up for air before the current dragged me down. In my struggle I saw Bruce, he broke the window open and grabbed hold of me. It was then, I realized, I need to save myself, or I will drag everyone I love, which is my husband, and now, three cats, with me.

In 2012, Bruce knew I was lost, and he took over driving the car. While he drove on the back roads, we talked. He mentioned he loved my story ideas and I should write. Knowing I knew nothing about writing or publishing, we got on the topic of school. I took the map out of the glove department and opened it. I found the road leading to the Free Application for Federal Student Aid. 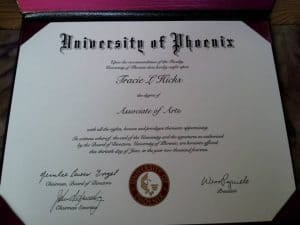 I scanned the map for roads leading to online schools. I found a turnoff that led to the University of Phoenix (UOPX). Bruce dropped me off and got a job as a security guard for a security firm. Next thing I know, the depression storm lessened. I got an Associate of Arts Degree in Communications in 2014, and Bruce returned me the car. I still felt lost, incomplete. 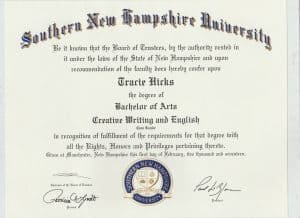 I took out the road map again. I found a highway called Southern New Hampshire University (SNHU). I found a turnoff to a Bachelor of Arts Degree in Creative Writing and English. I ended up with a dual focus on fiction and screenwriting with a mix of journalism and editing in 2016. It was during this stop my writing became public. I moved from Taylorville to Princeton, Illinois. I tried to work again, but failed and ended up with a new storm, anxiety attacks. 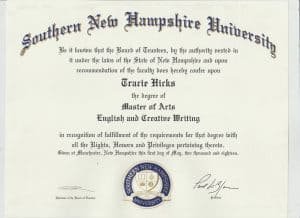 I drove back on the SNHU highway. No sooner than I did, I found another turnoff. This time, for a Master of Arts Degree in English and Creative Writing with a focus on fiction in 2018. Still, I felt there was something more.

Once again, back on the SNHU highway, I found a new turn off. You could still smell the fresh road pavement. This is where I am at, learning about writing and publishing. I am working on my Master of Fine Arts Degree in Creative Writing and a Certificate in Professional Writing.

Yes, there were other side roads I took and roadblocks I am trying to demolish. I am still fighting the disability monsoon with the government. The icy cold doctors do not believe my pain in my lower back and hip, but they feel my mental state is fickle and have not released me to return to work.

If I did not marry my first husband, I may be a manager of a supermarket and still owning or have a new home. I might not have met my second husband, and not be a journalist, screenwriter, and storyteller. Heck, I would not be here at Coffee House Writers, writing, editing, and training new writers. 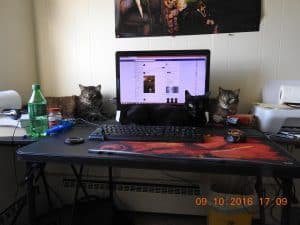 I still feel alone, even with three cats and a husband. I go out in public with Bruce, but never by myself. I made no friends here in Princeton because of my mental state. My sweet husband loves the fur babies but feels I am better off with a service dog which we cannot afford. But still, I am driving along the side roads learning and growing. And yes, the ex still looks in on me. I block him or ignore him.

I am still looking out of my window. It still is icy, snowy, and windy, but, at least, I am alive to fill the chill of the weather and the warmth of my husband and fur babies.

There are many roads and changing weather in our lives. All we can do, must do, is get the road map out. Plus, make sure we have what we need in our backpack for every type of atmospheric condition change.

The Evolution Of Fluffy