Welcome to The Apocalypse

Kendra’s deep chestnut-eyes flutter open. Her ebony arm reaches out to the nightstand. Her hand, with cat-like reflexes, knocks the twin bell alarm clock off the table and on to the floor. There, it flops like a goldfish out of the water.

Kendra flips the light switch on and shuffles to the shower, reaches in and turns the handle. “Nice… warm… shower.” She slips off her purple short sleeve tee and then her matching drawstring shorts. She turns to the shower, pulls back the curtain and steps in. “WHAT THE FUCK!” Rubbing her arms, she jumps out of the shower and grabs a towel from the sink and wraps herself up.  “I’m awake now.”   She reaches in and turns the water off and walks to the bedroom. Mental note, remember to tell the landlord the water heater is out.

Staring into her closet, she reaches in and pulls out her chalky mint polo shirt. The Gaming Life embroidered on the left chest. She reaches back in and grabs her coal Crawford pants. I hate wearing uniforms.

Kendra walks out of her bedroom and down the short hallway toward the sound. “What the fuck!”

“I’m a commin’!” She pins her name tag onto her shirt. 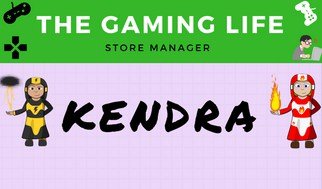 “Hold on to your horses.”

Kendra slips a small step stool from behind the couch. She unfolds it, steps up, and looks out the peephole. “What the fuck!” She shakes her head and looks through the peephole again. “Mr. Green, are you okay?”

“Um? Mr. Green, why are your eyes milky white?

“Okay. Mr. Green, how did you get those open, yellow puss sores?

Kendra steps down and sprints to her window. She looks down from her six-story apartment building. “What the fuck!” She turns and runs to her phone that is charging by her computer. She scrolls through her text messages.  What!! A meteor landed near me? What the fuck Mike! Your sister’s attacking you. Kenny asking if we’re opening? What’s he trying to do, get out of work? Guess I’ll check Facebook. What the hell! Parents attacking kids? Oh, my! Is he eating his wife?

Kendra drops her phone, runs to the window, and looks down. She sees her best friend, Leeann and her boyfriend hitting the zombies over the head with makeshifts baseball bat axes. That confirmed everything. Kendra and her friends had a plan in case something like this or another disaster happened.

She sprints off to her room, grabs her bug-out bag from the closet. She runs back to the window and opens it. She pops the screen off, watching it fall.

Leeann looks up. “WATCH IT THERE. YOU ALMOST HIT ME!”

Kendra looks down and waves. “SORRY! IS IT SAFE TO COME DOWN?”

Leeann looks around and looks back up at Kendra. “YEAH, IT’S SAFE. COME ON DOWN!”

Kendra attaches her escape ladder to the base of her window. She flings the rest of the ladder outside the window. Taking one step at a time, she climbs down the ladder. Looking down, she sees her friends starting up at her. “OH SHIT!”

“DON’T WORRY, LANCE WILL CATCH YOU!”

Kendra shakes her head and closes her eyes. Lucky me, he is the best catch on the high school football team.

“HE BETTER CATCH ME!”

Kendra lets go of the ladder and falls into Lance’s strong arms. “Thanks’ buddy.”

Kendra takes a hatchet from the side of her backpack. “Where’s your jeep, Lance?”

“At the side of the building.”

Everyone tip-toes to the jeep. Lance unlocks it, and everyone steps inside. He turns the jeep on and then turns the window shield whippers on. They wipe away the blood dripping down from the front and windows.

“What was that?” asks Kendra.

Everyone looks up towards the power plant. A mushroom of fire lights the sky.

Kendra takes her phone out of her pocket.

“What are you doing, Kendra?”

“He may already be at the cabin.”

Lance shakes his head. “Doubt it.”

Leeann stares at Lance. “Why you say that?”

He smiles at her. “Mike’s in love with her.”

A smile forms on Kendra’s face.

Leeann turns back to Kendra. “When was the last time you heard from him?”

Kendra gives her phone to Leeann.  “He sent a few texts messages early morning, between two-thirty and three-thirty.”

“What is it? Asks Lance.

Lance shakes his head. “We’re heading to the woods.”

Lance plows through the zombies in his four-by-four jeep. Knocking them down as if they were bowling pins. Three hours later they came upon their bug-out cabin, surrounded by a high fence.

Lance walks to the generator. The girls went inside to unpack. The lights flicker on. Leeann walks to the window and opens it. “WE GOT LIGHTS!”

“GOOD! I’M GOING TO CHECK THE CAMERAS AND THE SURROUNDINGS!”

Leeann closes the window and walks back to the kitchen. Kendra is sitting on the table. “What is it, sweetheart?”

Kendra turns to Leeann, tears stains her checks. “What about Mike?”

“Yeah! What about Mike?”

Leeann and Kendra turn towards the bathroom. Mike walks out, drying his hands.

Kendra runs to him and jumps into his tan spaghetti arms. She feels his heart beating in his chest, and him caressing her cornrow hair. She looks up, deep into his electric blue eyes. “How did you get here?”

He draws her close to him. “After I killed my sister. I tried to get to you.” He shakes his head. “But, I was blocked off by the military.” He smiles at her. “I came here. I knew if you were alive, you’d be here.”

Leeann turns the radio on. The DJ comes on. “GOOD MORNING, ZOMBIES. WHAT A GOOD DAY FOR AN APOCALYPSE.”

Open Letter to My Granddaughter