So You’re Having Surgery: The Other Side

So, I made it. I survived. I made it through surgery with flying colors. All the worrying I did was for nothing! Although I am sore and exhausted, it was worth it.

I wasn’t feeling very confident just two weeks ago. I was terrified. I am embarrassed to admit that I thought I was going to die during surgery. Yeah, I realize now that I have watched one too many episodes of Grey’s Anatomy. The over-dramatized death under general anesthesia made me more than a little paranoid.

On my surgery day, I was a mess. I had trouble sleeping the night before, and the 10:00 a.m. check-in seemed so far away. I was tired, scared, and hungry. Not being able to eat or drink anything since before midnight, I must admit I was a bit cranky as well. I love my bowl of cereal in the morning along with a hot cup of Starbuck’s French roast. Although I was allowed a few sips of coffee, it was black, no sugar or cream, and it didn’t help me much waking up.

It seemed as though time was crawling until it wasn’t. Before I knew it, my husband was bugging me to leave. This is when the real freak out began.  I was trying to think of a million ways to get out of it, but not one came to mind. It was a necessary surgery and had to put my big girl panties on.

Once we arrived at the hospital things started happening very quickly. I was in and out of check-in minutes, and it was up to the surgical floor. Behind a locked door were beds set up in a horseshoe with only curtains separating each. I was quickly corralled and sent back to put on the ever-fashionable hospital gown. Everyone who entered the locked door of the surgical wing was given their own nurse. Mine was Alfonzo. 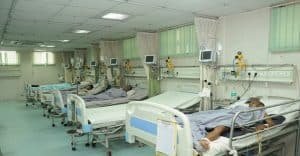 So far, I had been able to keep my nerves under wrap and my tears at bay. I found myself deep breathing as if in some intense meditation, but it was only to keep myself from hyperventilating. Then the needles came. I am terrified of needles, but bloodwork needed to be done. It was at this point the asked my husband to leave. Almost simultaneously I began to cry.  No; sob.

The hours, days, and weeks I spent worrying came to a head and I couldn’t control the waterfall of tears that came pouring down my face.

Luckily my nurse had the patience of a saint. He was kind and understanding and did everything he could to reassure me. Fat chance of that! I managed to pull myself together enough to stop the tears and sobs that came with them, but that didn’t last very long.

As the time grew closer for my surgery, I grew even more nervous than I already was. I even worked myself into an anxiety attack which caused an asthma attack. Yeah, I was a peach. It took a breathing treatment and a gabapentin anxiety medication to calm me down which I am sure my nurse was more than happy to give me by this point.

It’s not like I haven’t had surgery before. I have had two previous surgeries. I don’t know why I was such a nutcase for this one. Whatever the reason, the gabapentin had kicked in, and I was much calmer. Calm enough to ask my doctor all the questions I had, and there were many. Some we had already gone over at my pre-op appointment, including the reassurance that she had never lost a patient during a planned gynecological procedure.

The next thing I know, they are wheeling me back to surgery, and whatever the nurse stuck in my IV before that, well that was good stuff because I no longer had a care in the world. The last thing I remember was someone taking off my hospital gown. Normally this would have made me so uncomfortable, but that didn’t even seem to bother me.

The next thing I know, I am waking up in recovery thirty minutes after my surgery ended, and man was I thanking God! I made it. I wasn’t in any real pain yet. Probably due to the pain medication they were feeding me through my IV. I had no nausea from the general anesthesia and aside from feeling loopy, I was doing okay. I do vaguely remember asking my nurse for my purse, so I could call my aunt. I know I called but have no recollection of that call or what I said. Yeah, that is a pretty scary thought.

I am a goal-oriented person, so once they told me once I use the restroom and am able to eat, use the restroom, and walk, they would let me go home. Well, let me say that I have never had such a problem eating a cracker before. Because of the intubation tube during surgery. My mouth was drier than the sand in a desert on a hot summers day. Even with drinking water, the cracker stuck to the roof of my mouth as if it was terrified to go down. Just like me before surgery.

Once I managed to complete this goal, the rest came pretty easy, and by 7:30 p.m., I was being discharged. All I wanted was to go home to my comfy memory foam bed. I am not a fan of hospitals and always recover better at home. 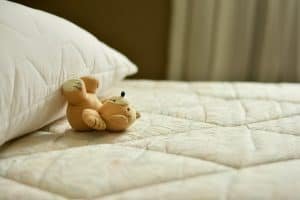 Recovery was rough. The first few days were brutal. I even gave in and took the pain pills my Doctor prescribed. Before surgery, I was adamant about not taking them. I am not a big fan of pain medication, but that first night I was crawling out of my skin from the pain. I used them for the first two days. It was ibuprofen for me after that.

Once I got through the first week, things started getting a little better. Now that I have two weeks of recovery under my belt I am going a little stir crazy. I am still under strict restrictions about what I can and cannot do. I am supposed to rest. Rest to me is a four letter word because I have trouble sitting still for more than a few minutes at a time, but I am listening. I will do whatever it takes never to have to have surgery again.

So, my point to all this? Yes, surgery can be a scary thing. It is normal to be nervous, but with the trust, you have in your medical team, try not to work yourself into the freak out I did. It’s not worth it and can make things harder. The anesthesiologist has a fix for just about anything that can happen under general anesthesia nowadays, and they have blood on hand in the event you need it. Yes, I asked.

Surgery isn’t always an easy thing, but with the support of family, friends, and a great medical team, you will get through it and wonder what all your worry was about. I was blessed to have an amazing medical team taking care of me at Kaiser Permanente in Woodland Hills, Ca. Dr. Calder and everyone else who cared for me that day were kind, understanding, patient, and completely competent. They made the experience easier with their kind and comforting words, and I am so grateful for that.

A Demon on Mount Olympus