As dusk fell rapidly around us, Prince and I worked our way through the village, the timber and stone dwellings towering over our heads. I was accustomed to the roofs of homes soaring high above me, but nature created them with graceful limbs and foliage that swayed and rollicked in the breeze. 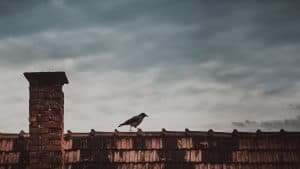 The topside covers of these domiciles was lifeless and aloof, blackened chimney stacks squatted on top of them spewing thick smoke into the darkening sky.

Polluted clouds burst from the chimneys and coiled through the air like great caliginous beasts, bulging and billowing, stealing the light of the moon and stars like a cutpurse snatching up a cache of diamonds.

I found myself thinking the Bears’ cottage, with its wood-shingled roof, was more appealing than these drab squares people had boxed themselves into. The humans who built that house at least had the good sense to live in a grove in the heart of the woods.

To conserve resources, many other citizens have made abandoned human homes their own. Over the past few years, I’d heard more and more reports of these places popping up all over the Forest, but I assumed it was mindless conversation. Rockledge was tangible proof that the stories were accurate. 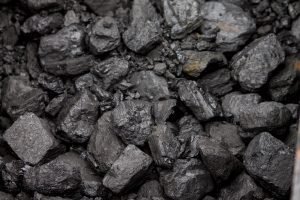 Prince sniffed the air and drew his ruff over his nose. “What on earth are they burning?”

I wasn’t a hundred percent certain, but I had a good idea. “Long ago, the dwarves uncovered a combustible rock that burned hot enough to light their furnaces. It produced a fetid cloud and left behind such a heavy residue they stopped using it immediately.”

“What was it called?”

I screwed up my nose and wrapped it with my scarf. “Coal.”

Prince coughed and talked through the layered material covering his mouth. “I don’t like it.”

“Me neither. Let’s go indoors. Maybe the stink won’t be as bad.” 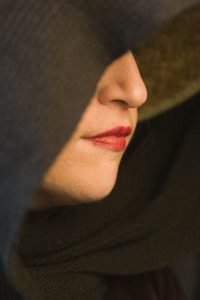 Our strides more purposeful, we concentrated on finding a tavern. As we wandered, I couldn’t help notice that besides the landscape, the people of Rockledge had also changed. They were less cordial, walking alone or in tight-knit pairs, faces buried deep within the folds of their hoods.

Now and then, a flicker from a lamp post shed a pinch of light onto someone’s face, and I glimpsed the fear and suspicion in their eyes. What had taken place in this village to spur such a transformation? My thoughts jumped to the scrap of cloth with the Scrivenger’s symbol, but I instantly rejected it.

To our enormous relief, the acrid smell receded with each block we crossed. Breathing the clean air, Prince, and I hustled along inquiring into food and accommodations but fell short until we arrived at a little pub tucked away in the corner of an alley called The Twelve Fairies. The dilapidated exterior contradicted what we discovered upon passing over the threshold. 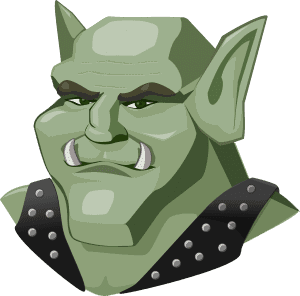 Slightly subdued for a place selling wine and spirits, the atmosphere still had a perceptible lift compared to the rest of Rockledge. People of all races, shapes, and sizes filled the place: fairies, humans, elves, trolls all absorbed in friendly conversations. A vast congregation of this kind wasn’t unheard of in the Forest, but it was remarkable.

Even on their finest days, trolls weren’t the friendliest lot. They usually lurked under bridges, and emerged to bully passersby into paying an inflated tax to cross. I’d met enough trolls in my lifetime to recognize their peaceful presence here was curious; not to mention the large number of fairies mingling so readily with other magical folk.

A hush fell over the crowd when we entered, a stillness full of shrewd caution as every eye looked us over. Their glares froze Prince and me in place. Feeling very much like a hare caught in a hunter’s snare, I swallowed my uneasiness and raised a hand in greeting. “All enchantments upon you, my friends.”

The seconds ticked by, and the silence thickened until I felt I might choke on it. I motioned to Prince that we should leave. Without missing a beat, he inched toward the door alongside me, his tongue hanging like a limp noodle down his front. Fear seemed to have turned it flaccid. Under different circumstances, I would’ve welcomed its spiritless behavior, but at that moment a little tongue rodeo would’ve saved us a painful evening.

As my hand brushed the handle, a dozen fairies shot toward us with the speed of a quiver of arrows toward a bull’s eye. “Wait,” the one in the lead shouted.

I carried on with my plan to leave the place as quick as possible, but Prince’s cursed tongue foiled it instantly. At that precise moment, it wrapped itself around my tail and hoisted me backward. Yanking on his tongue, we both struggled to escape.

At a table nearby, a troll slumped over a basin of soup noticed the fairies reaction to our encumbered exit and lumbered to his feet knocking over his stool. “I’ll get ’em fer ya,” he roared.

With remarkable speed, he sidled up to the door, shoved us backward, and barred our way out. He gave us a nasty grin. My fur bristled with dreadful anticipation. I snapped my eyes shut and braced for an onslaught of spells that would incapacitate me. Prince trembled and whimpered beside me.

“We know you,” the lead fairy said.

I cracked open an eye. Prince and I looked expectantly at each other, heartened by the turn of events. My spirits lifted until Prince whispered from the side of his mouth. “I’ve never met a fairy before. Have you?”

Fairies lived in all parts of the Forest but being small and constantly pestered for their magic they kept to themselves. Some, like the Tree Sprites, roamed freely but most lived in homes that were hard to find. During my days as a cartographer, I found a few villages to add to my sketches, but most remained hidden. To this day, I still lament my inability to complete an accurate map of the entire kingdom.

“Yes,” I replied, quelling my bitterness at the secrecy of fairies, “but that was years ago in another village far from here. I haven’t spoken to one since I retired.”

Wary, I gave a terse nod and eyed the fairy struggling to find a hint or a trait of recognition. But, in truth, the fairies I’d met wore bright-colored clothes made of flower petals and carried magic wands whose tips shimmered like the morning sunrise. They were members of an order known as The Godmothers, another group that regularly interacted with the many residents of the Forest. The tiny woman fluttering before me had no wand and wore the plain frock of a barmaid.