I’m dedicating this week’s story to my father, John Constantin. My dad has been very supportive and motivated me to become a writer, and he is the first person I turn to for bouncing story ideas around. Dad has helped me create the main protagonist, Detective Stuart Linux, in my new murder mystery series “The Linux Mysteries.”

Blood covers the concrete sidewalk; it’s spilling over into the street—a bullet wound in the chest and head. A black leather purse is torn apart at the end of West Avenue. How can a person be so cruel to kill an elderly woman? A sweet older woman who was probably a loving grandmother who made cookies for her grandkids every Sunday after church. I don’t understand criminals.

“Are they that desperate?” Detective Linux shrieked.

He can’t look at the victim anymore. She reminds him too much of his grandmother, and being on West Avenue brings back many childhood memories.

It was a tradition of ours for so long, until that night at the park. I often think about them, but never pick up the phone to call.

“Detective, I have the forensic team coming down here to collect evidence.”

“Stuart, did you hear me? Stuart, is everything okay?

“Did you have another dream last night?” says Harry.

“Yeah, the one where she is drowning on the beach and calling my name.”

“You will solve the mystery; I have faith in you, bro.”

“These dreams feel so real—like she needs me to rescue her,” says Detective Linux with his arms crossed.

Officer Harry Bell says, “Go home, buddy. I will stay here with the forensic team and will leave a report on your desk.”

Stuart padded Harry on the back and slowly walked back to his car. He remembered eating grilled cheese sandwiches at Albert’s Restaurant around the corner when he was about eight years old. Being back home in Riverside feels refreshing and overwhelming at the same time. The restaurants and shops Stuart visited as a small boy have since disappeared, and the city he once loved looks like a deteriorating neighborhood. Plastic bottles and cigarette butts littered the decaying grass, and there were houses with boarded-up windows and broken metal gates. Wow, everything has changed.

Detective Linux unbuttons his caramel trench coat to reach the inside pocket. He grabs his car keys and pushes the unlock button. The keys are in the ignition, and he turns up the radio, blasting “Hurricane” by Luke Combs through the car windows. He’s driving down the road with a don’t care kind of attitude.

Detective Linux arrives at his mother’s house. He quietly shuts the front door behind him. He hangs up his coat on the wooden hooks above the entryway storage bench and walks into the kitchen. A yellow sticky note catches his eyes as he walks up to the refrigerator.

The note read, “I made your favorite food for dinner; it’s in the fridge. Microwave for three minutes, love Mom.”

His face lights up like fireworks on the Fourth of July when he takes off the red lid of the storage container and sees meatloaf and mash potatoes. Stuart grabs a fork out the drawer underneath the coffee pot and sits at the kitchen table. He places his elbow on the table and leans his head on his left hand. Grandma was lying still on the tile floor of the bathroom. Her skin pale as a ghost and her body cold as ice when he kissed her forehead goodbye. Stuart was very close to his grandmother, and her death was sudden. For the last month, he sees her calling out for help. She is in the ocean, trying to keep her head above water. The sky is bright blue, like on a summer day. There’s a white sandy beach, and it feels so real to Stuart like he is actually on the beach—like it’s not a dream. Something in his gut tells him that his grandmother dying wasn’t out of the blue. Stuart places his dishes in the kitchen sink and goes into the garage. The family has been clearing out grandma’s house and trying to figure out what they should keep and sell. Seeing grandma’s brown recliner without her sitting in it, makes everything a reality.

Yesterday, Stuart’s mother was labeling the boxes to keep everything organized, but this one large cardboard box had a piece of paper in it. The paper was yellowed and wrinkled and had the following numbers “4,8,2,1,9,0,” written in smooth black ink.

“Where did Momma leave that paper?” Stuart says, itching his head.

He checked the industrial shelving unit against the wall next to the doorway. The paper is peaking out of the cardboard box labeled “Keepsakes.” Stuart lifts the entire box and brings it with him back to the kitchen. On the way back in, he flips the switch to light the chandelier that hangs above the kitchen table. Stuart opens the cardboard box, and there’s nothing. He turns the box around, and a medium-size box pops up. There’s nothing inside the box. He spins the box counterclockwise, and a small box appears. Something silver peaks out of the box. He rips the top open and finds an antique metallic jewelry box. The jewelry box is unique, with floral markings engraved.

“I wonder what trinkets grandma stored in here.”

He flip-flops the jewelry box and sees a combination lock on the box typically where a key would be inserted. Stuart moves the multiple cardboard boxes onto the floor and takes a seat. He stares at the numbers written on the fragile paper. It took Stuart six times to unlock the jewelry box. It turns out the combination was his birthday, but the numbers on the paper were written backward. With Stuart grinning from ear to ear and his eyes wide open, he lifts the cover-up and finds a brash barrel key.

“What does this key go to? I have never seen grandma with this key before.” 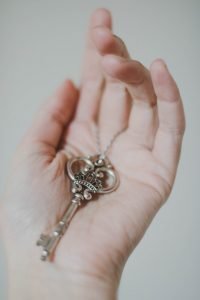 Destiny J. Constantin is 27 years old and resides in Lockport, NY, with her family. She is pursuing a second Master's Degree in Higher Education to further her education and continue developing as a teacher. In November of 2021, Destiny earned her dream job. She is an Online Adjunct English Instructor for Bryant & Stratton College. In October of 2020, she graduated with honors from Southern New Hampshire University with a Master's Degree in English and Creative Writing. She strives to become a best-selling author one day. She is the co-author of The Journey with Dad and The Journey with Dad 2. The Journey with Dad series was written with her father, John Constantin, and they are children's stories about a father and daughter taking mysterious road trips after facing challenges. Destiny is currently working on writing her first young adult novel, titled I'm No Ordinary Girl. Destiny Constantin is a self-taught baker and enjoys baking for friends and family. Destiny enjoys reading books by Cassandra Clare, Nicolas Sparks, John Green, Veronica Roth, Gayle Forman, and many others. Her favorite book is Speak by Laurie Halse Anderson. She enjoys writing mysteries, children's stories, and teen fantasy because it's what she knows and loves to read.