The Origins Of Easter

This year, Easter fell on April 1st. It is the time of year that Christians celebrate the death and rebirth of Jesus Christ. For Christians, it is a time of spiritual grace and gratitude for the ultimate sacrifice which was paid so we, as mankind, may be forgiven for our sins. The resurrection of Jesus is a story of overcoming the powers of darkness. It’s a story of martyrdom at the hands of persecution and the purest, most divine love triumphing over intolerance. The story is a humbling one, a powerful one and, while I do not wish to take away anything from this holy celebration, I can’t help but wonder if the reason why it resonates so strongly with us as a culture is because the tale is one that has been told since ancient times. The concept of rebirth and resurrection is, quite frankly, much older than Christianity.

We’re all familiar with the fertile crescent, right? That piece of land between the Tigris and Euphrates rivers where the first civilizations emerged? Well, this is the area the Sumerians occupied. It is believed they occupied this region sometime around 4000 BC. The Sumerians were a vast and powerful people, with some of their city-states containing as many as 80,000 citizens. They were the inventors of cuneiform, the first written language, are responsible for our 60-second minutes and 60-minute hours, invented beer, the plow, the wheel, law codes, and literature; and they created one of the world’s first trade networks over land and sea. What does any of this have to do with Easter, you ask?

The Sumerians had a complex and well-developed religion. Like most ancient cultures, there were many gods and goddesses in this Mesopotamian pantheon. One of which was Inanna, later adopted by the Babylonians and named Ishtar. She was the Goddess of love, sensuality, procreation, fertility, and war and she has her own resurrection story. In the Sumerian poem, Inanna’s Descent, she goes to the underworld and is stripped of her power, humiliated, judged, turned into a “piece of rotting meat,” and hung on a hook on the wall of her sister’s throne room.

Inanna is saved by her father, Enki (later adopted by the Babylonians as Ea). Enki was one of the three most powerful Gods in the Mesopotamian pantheon. He was the creator and protector of mankind and a mischievous God of wisdom, magic, and incantations. His was the name used by exorcist priests to expel evil, and he was known to be the source of all ritual magic. So, it’s interesting that he is the one who resurrects Inanna. He sends forth two Gallas, creatures he creates to enter the underworld “like flies,” to go to the Goddess of the dead and comfort her. Yep, that’s right. Compassion and empathy are used to get Inanna’s corpse back. Then, they sprinkle life water and food over Inanna, and she is reborn. There’s a bit more to the story, but I think the parallels are clear.

Next, we have the resurrection story of Osiris and Horus from ancient Egypt. Now, I’m only mentioning this because there is a ton of misinformation out there concerning the correlations between Horus and Jesus Christ. In fact, there was a book published in 2004 claiming the story of Jesus was just a regurgitation of the myths concerning Horus and Osiris. The book, written by Tom Harpur, makes an interesting claim but the book is mostly speculation and not grounded in fact.

Allow me to, attempt to, tell the tale of Osiris and Horus. Osiris is known as the Egyptian God of the Underworld and the Judge of the Dead. He was the firstborn of the gods of the earth and sky and, as such, was a member of the most powerful tier of gods in the Egyptian pantheon. His wife (also his sister?) Isis is one of the most popular Goddesses of Egypt. Shortly after the world was created, Osiris and Isis ruled over the land. The humans who were born of the tears of Atum were, at first, uncivilized and barbaric. Osiris taught these barbarians culture and civilized them. He brought to them the knowledge of how to worship and honor the gods. This place was a paradise, where all the people were equal and there was always an abundance of food and water.

Enter Set, Osiris’ jealous and evil brother. Long story short, he gets mad at Osiris because his wife disguised herself as her sister (Isis) and cheated on him with Osiris. So, Set makes this box and tricks Osiris into getting into it (note to self, never get into a wooden box set to your personal specifications). Once Osiris is inside, he shuts the lid, chucks it into the Nile, and proceeds to usurp his brother and ruin the paradise he and Isis had created.

Isis eventually finds the box, with the dead Osiris inside of it and does her best to hide his body from Set while she goes off to find some magical herbs that will bring him back to life. Unfortunately, someone let it slip that the nice god had been found and word gets back to Set that his own wife knows where the body is. He tricks her into telling him where she and Isis had been hiding Osiris. This time, Set goes all psycho-killer and chops his dead brother’s corpse into pieces before scattering said pieces all across the land.

Isis is devastated. She gets her sister to help her find all the missing body parts, and the two of them reassemble Osiris. Well, all except his penis. Apparently, that had been eaten by a fish (ewwww). So, Osiris is put back together and brought back to life, but he isn’t completely whole. This is what makes him the Lord of the Dead. His missing penis is what forces him to have to rule the Underworld (I feel like there’s a treasure trove of psychological stuff here, but I’m leaving it for now).

So, Osiris is resurrected, but this isn’t the end of the story. While her husband goes off to rule in the land of the dead, Isis turns herself into a hawk and flies over the fish who ate her man’s schlong and somehow pulls his essence into her and becomes pregnant. Then, she goes and has her child and raises him in hiding in the swamps. Her child is Horus, the falcon-headed Egyptian God of the sky, protector of royalty, defender of wrongs, defender of order, and uniter of lands. He comes to represent balance, which is something that was extremely important to the Egyptians.

Horus grows up in secret and eventually avenges his father and restores order and peace to the land. The interesting thing is the younger version of Horus was depicted as a child with wings holding a finger to his lips. This child-version represented the promise the gods made to heal humanity’s sufferings. The young Horus would eventually be adopted by the Greeks as Harpocrates, a god of silence, secrets, and hope. This Greek version was insanely popular among the Romans, as the Cult of Isis (the most popular mystery cult in Rome) held him as the divine son of Isis. So popular was this god in Rome, that he would be depicted in Roman art as a babe cradled in the arms of his mother, Isis. There is speculation that this image of the divine mother and child greatly influenced Christianity. 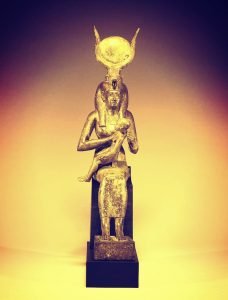 Up next, we have Mithra, an ancient Persian deity who was associated with the Indian Vedic god, Mitra. Mithras was a God of the sun and heavenly light, guardian of oaths, protector of the righteous and, the nemesis of evil. There isn’t much known about the original worship of this god. However, worship of him became extremely popular in Rome as Mithraism. There is a lot of speculation about this secret religious cult, but there is no argument that the themes of rebirth and resurrection were extremely important to this religion. The tale of the sacrifice of the bull is probably the most important. In it, Mithras is asked to sacrifice the bull, which he does so reluctantly. The bull is then resurrected as the moon, and its death provides grain and all the creatures of the earth.

There is a debate on about why Mithras was so reluctant. One account is that early depictions of Mithras were of a bull. Others suggest that the bull was not Mithras himself, but a different god whom Mithras was close to. There is so little real information on this story it is almost not worth mentioning. However, the popularity of the Mithras cult in Rome and its emphasis on rebirth before the spread of Christianity does help explain the acceptance of this theme of resurrection.

There are other stories of resurrection as well. There’s the Greek God, Dionysus, who was a divine child resurrected by his grandmother. Odin, in the Norse pantheon, sacrificed himself to conquer the knowledge of death by spearing himself in the ribs and hanging from Yggdrasil, the World Tree. There’s the tale of Ganesha, in the Hindu religion, who was beheaded and brought back to life with the head of an elephant. In the same pantheon, there’s the God Krishna and his accidental murder and ascension to heaven. There are tales of resurrection and rebirth from all over the world, in nearly every pantheon, and most are much, much older than Christianity.

I think that resurrection and rebirth have been around since ancient times says something about us as humans. I believe it speaks to our desire for a promise of eternal life, our desire to conquer death and, at a basic level, I believe it speaks to our need for second chances. In each tale of resurrection, something is given up, left behind, sacrificed so that life can be better, fuller than it was before. With the passing of Easter, I challenge you to live a better life, a fuller one. Leave behind old patterns of thinking and belief that keep you from living the life of your dreams. Give up that self-doubt, that harsh critical opinion of yourself and step into a new life. Just as any other rebirth, it may not be easy. There will be things you have to give up to move forward, but the sacrifices you make towards bettering yourself will be more than worth it in the end. What will you be letting go of this spring season? What will you be embracing?

An Open Letter To My Younger Sister: ...

Dandelions, An Herb With Its Own Day: ...

JL Willing is a fantasy and fiction writer from GA. When she isn't writing, or thinking about writing, or reading (which is really just preparation for writing), you can find her cuddling up with her beloved Austrailian Shephard, Bella, or consistently losing the battle against the chaos and mass destruction her two extremely energetic boys create. JL has a passion for inspiring and encouraging other writers to follow their dreams. She is also a humanitarian at heart and believes in the empowerment of women and equality for all. You will find that her articles cover topics ranging from environmental awareness, feminism, educational reform, and inspirational messages intended to help others live more authentic, joy-filled lives.