The Sinner on USA: A Must-See Show

This August, premiering on the USA network, is a show titled The Sinner, and it is a definite must-see program. It is based on the international best-selling novel by German author Petra Hammesfahr and was adapted into an American version of the novel for TV.

The Sinner focuses on a woman named Cora Bender who has killed a man but no one understands the reason why a lovable quiet mother would go out and stab a stranger in the throat repeatedly until finally, someone pulls her off his body. Since Cora decides to go after this man and stab him in front of her family and friends, it seems like an open and shut case for the local police right? The commissioner is haunted by this case and refuses to close the file as he starts his own investigation. Slowly, it leads him to an unraveling of Cora’s past which is, in short, a woman’s private hell.

This series will take you on a journey where you will question the truth at every turn and it will be running as a limited 8 part series on their network. It stars Jessica Biel in a performance that you will not recognize. I also loved that Bill Pullman will play the commissioner. It seems to be an all-star cast but the most edge of the seat moments will come with every episode.

I really enjoy thrillers and think this is a must-see show. I am loving the book and the adaptations of it seem a bit different from the original, as it is based in Germany. I think what is at the center of the plot is what remains intact.

For these reasons, I hope you all will check take the time to check out The Sinner on the USA Network.  It is a must-see show!

Check out the trailer here. 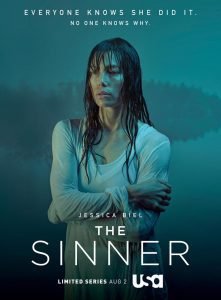