CultureEnvironmentFamilyFoodHomeMediaMemoriesPoliticsRelationshipsTravel
Home›Culture›A Day Of Giving Thanks And A Day Of Mourning: The Truth About Thanksgiving

A Day Of Giving Thanks And A Day Of Mourning: The Truth About Thanksgiving

Thanksgiving, the holiday between Halloween and Christmas. Taught in schools as a three-day harvest festival celebrated by the Pilgrims and the Wampanoag tribe in 1621. All we know about the day is a reprinted reference by Edward Winslow from the Mourt’s Relation: D.B. Heath, ed. Applewood Books. Cambridge, 1986, p. 82:

“And God be praised we had a good increase… Our harvest being gotten in, our governor sent four men on fowling, that so we might after a special manner rejoice together after we had gathered the fruit of our labors. They four in one day killed as much fowl as, with a little help beside, served the company almost a week. At which time, amongst other recreations, we exercised our arms, many of the Indians coming amongst us, and among the rest their greatest king Massasoit, with some ninety men, whom for three days we entertained and feasted, and they went out and killed five deer, which they brought to the plantation and bestowed on our governor, and upon the captain and others. And although it be not always so plentiful as it was at this time with us, yet by the goodness of God, we are so far from want that we often wish you partakers of our plenty.”

The meaning of the word, “thanksgiving”

What does the word thanksgiving mean? According to Merriam-Webster dictionary, it means:

Day of giving thanks

According to the History Channel, individual colonies and states celebrated days of thanksgiving. When the Europeans defeated the Pequot tribe (Pequods), Massachusetts Bay Governor, John Winthrop wrote in his journal in 1637, “There was a day of thanksgiving kept in all the churches for the victory obtained against the Pequods, and for other mercies” (page 222).

The New York Times backs the History Channel thanks to an interview with Mr. James W. Lowen, a sociologist and the author of Lies My Teacher Told Me: Everything Your American History Textbook Got Wrong. He tells the newspaper, “Beyond that, claiming it was the ‘first Thanksgiving’ isn’t quite right either as both Native American and European societies had been holding festivals to celebrate successful harvests for centuries.”

Remember, Europeans were living in North America before 1621. Here are a few:

“There was a day of thanksgiving kept in all the churches for the victory obtained against the Pequods, and for other mercies.” – John Winthrop 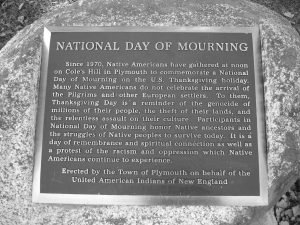 The fourth Thursday of the month is not only Thanksgiving but a National Day of Mourning. Since 1970, the United American Indians of New England (UAINE), have fought against discrimination of the Native Americans. According to the website’s background:

“The pilgrims did not find an empty land any more than Columbus ‘discovered’ anything. Every inch of this land is Indian land. The pilgrims (who did not even call themselves pilgrims) did not come here seeking religious freedom; they already had that in Holland. They came here as part of a commercial venture. They introduced sexism, racism, anti-lesbian and gay bigotry, jails, and the class system to these shores. One of the very first things they did when they arrived on Cape Cod — before they even made it to Plymouth — was to rob Wampanoag graves at Corn Hill and steal as much of the Indians’ winter provisions as they were able to carry.”

In a suppressed speech by Wamsutta (Frank B.) James, Wampanoag:

“It is with a heavy heart that I look back upon what happened to my People. Even before the Pilgrims landed, it was common practice for explorers to capture Indians, take them to Europe and sell them as slaves for 220 shillings apiece. The Pilgrims had hardly explored the shores of Cape Cod for four days before they had robbed the graves of my ancestors and stolen their corn and beans. Mourt’s Relation describes a searching party of sixteen men. Mourt goes on to say that this party took as much of the Indians’ winter provisions as they were able to carry. Massasoit, the great Sachem of the Wampanoag, knew these facts, yet he and his People welcomed and befriended the settlers of the Plymouth Plantation.”

For the Indigenous people of North America, Thanksgiving is not a day of giving thanks, but a day to mourn the loss of many Native tribes, theft of lands, and culture since the arrival of the Europeans.

The truth of it all is we can’t change the past, but we can learn from it. We can change the present and the future. So, be thankful for what you have and mourn the loss of those who died fighting for their convictions.

Adventures Of A College Parent – 4