Who Dropped The Ball?

It shouldn’t be this way. One often hears phrases like this when tragedy strikes. Such was the case when the detectives arrived on the scene. The dispatch sent them to investigate the crime committed in Times Square.

They were just around the corner, at the doughnut shop when they got the call. He had his apple fritter, and she had her chocolate dip with sprinkles. There was still evidence of their guilty pleasure all over her fingers and in his rugged beard.  They tried to hide their feelings behind their take out coffee cups, but they fooled nobody. They were partners in more than just police work.
Detective Twirlymoustache crouched down for a closer look at the victim. “They never stood a chance,” he muttered under his breath.
Detective Fancypants was surveying the scene. You could tell from the squint in her eyes that she was searching for the culprit.
Out of nowhere came a crack of thunder, which rumbled and echoed off the buildings. A maniacal laugh tinkled with what sounded like breaking glass followed the thunderous boom, sounding almost as loud as the thunder had been. Panic grew in the crowd of bystanders, escalated by a shriek as a woman fainted dead away. Police officers patrolled the outskirts of the crowd, to keep witnesses from fleeing the scene.
The ambulance arrived just in time to see to the woman who fainted. As she regained consciousness, Detective Fancypants checked on her. She wanted to know if there was more to her lack of composure.
The woman pointed to the skyline and said, “I saw him over there!”
“Who did you see?” Detective Fancypants asked her, as Detective Twirlymoustache stood up to walk closer to the ambulance.
“I saw him! It was him! He dropped the ball!” The wilted woman was near hysterical in her response.
Murmurs from the crowd began to grow louder as the detectives leaned in to hear what she was saying. Everyone was inching closer to hear her accusation.
“Who was it?” was the forceful query of Detective Twirlymoustache. “Come on then, spit it out. Who caused the damage to these beautiful crystals and ruined New Year’s Eve?”
The woman closed her eyes and took a deep breath out of the oxygen mask before she lifted it to whisper, “It was the Y2K Bug. He was so fast; nobody else saw him coming. Please ensure my safety and the safety of my family as you hunt him down.”
Detective Fancypants shook her head in disbelief. Detective Twirlymoustache scowled as the crowd gasped with the woman’s revelation.  He shook his head disapprovingly at the woman, after tugging his unkempt beard three times. Detective Fancypants knew what that meant. They had three hours to solve the crime before they dropped the ball officially at midnight. He advised the event planner to cancel New Year’s Eve in New York City, which was unheard of.
Detective Fancypants took a moment to compose herself. The Y2K Bug was an urban legend from 1999 when the new millennium was about to begin. This made no sense to her at all. It wasn’t possible; the Y2K Bug wasn’t even real; everybody knew the truth.
Detective Twirlymoustache pulled out his cell phone and dialed a number. He asked for the Director of the CDC and spoke the words he hoped he would never have to say.
“Send out the Millennials. It has happened.” He then ended the call and told the police officers to disperse the crowd.
Detective Fancypants looked at her partner in dismay. “Twirlymoustache, you had better explain yourself, and you had best be starting with that phone call.”
“Not here, Fancypants.” He started walking towards their squad car. They climbed into the car and drove three blocks away before he began to fill her in.
He told her that yes, there was indeed a Y2K bug, and it was very destructive. Now that it had finally achieved its purpose, there was only one thing that could stand in its way. They created the Y2K Bug before the turn of the millennium, and when it had finally destroyed New Year’s Eve in Times Square, it would only continue to wreak havoc on the rest of the planet.
The answer was a special squad from the CDC called the Millennials. They were tech-savvy and further advanced than the Y2K bug. Only the Millennials could fix the broken ball. If they got it back together in time, the Y2K Bug would be deleted, and New Year’s Eve would be safe.
Detective Twirlymoustache took a deep breath. He continued to relay the story to Detective Fancypants. Her eyes grew three times their original size as he kept talking. As he finished, she knew just how real the threat was, and she wondered about this team.
Detective Twirlymoustache turned the car around. He flicked on the lights and sirens to clear a path back to the scene of the crime. He told Detective Fancypants they would need to go back, to be there in case the Millennials failed.
Before their eyes, the Millennials arrived in perfect Instagram style. They dispersed to get picture-perfect crime scene photos. Then they went to work on their cell phones.
Detective Fancypants was looking for wisps of smoke under their fingers. She had seen no one text so fast before, and before her very eyes, they cleaned the scene up. People appeared from all directions to repair the crystal ball and get it back on the pole for the midnight drop. It was as if it had never even dropped the ball.
Once they erased the crime scene, the Millennials took selfies by the ball and sent them out to their followers. New Year’s Eve was safe, and the Y2K Bug was nonexistent again.
Detective Twirlymoustache saluted the Millennials as they dispersed into the returning crowd. He looked at Detective Fancypants, winked at her, and drove off towards the doughnut shop. 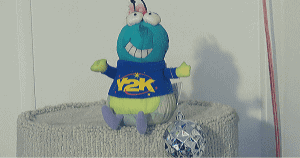 Tish Mac Webber's writing is her purpose, creativity is her passion, and jewellery designing is her pleasure. She is inspired by the ocean, especially where the Atlantic Ocean kisses the beaches of Cape Breton Island, where her own story began. She is the author who is Always Thinking... the jewellery designer who is Always Blinging...and her superpower is always being full of surprises! Tish MacWebber, Always Blinging… her jewellery designing hobby is the latest addition to her website. Her speciality is creating one of a kind, custom designs for her clients. She loves to delight her customers with her interpretations of what they order, staying true to her gifts of being full of surprises, and putting her talents to full use. In October 2018, her first book, From Where I am Sitting... A Collection of Cat Tales was published and is available on Amazon. It will be accompanied by her Limited Cat Tales Jewellery Collection, which can also be found on her website. Tish MacWebber is currently writing her second book, in which she will explore her latest concept. #Tishspiration, her latest creation, is defined as the art of surprising yourself. You can find more information about these and other projects at https://tishmacwebber.com/