227 miles northwest of Tucson, is the largest ghost town in Arizona. That town is Jerome.  Jerome was once a thriving copper mine town that also mined silver, gold, and zinc.

It was once known as “the wickedest town in the west” in its crazy heyday western town past. It was filled with saloons, brothels, and opium dens, but today it’s an artistic community. 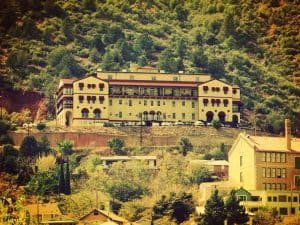 I haven’t had the chance to explore the hotel, even after numerous trips to Jerome. It is, however, on my bucket list. One day, I will be able to see for myself if it’s haunted.

The town itself has a “wild west” feel to it, remnants from its more violent past, yet it also has the energy of the artistic community.

There is a lot more to do in Jerome than ghost hunt. Jerome is a living breathing example of how the world of the old merges with the new.

It has a wine tasting tour titled “A taste of Jerome” that offers tastings of wines made in Jerome. My sister and I took this tour and we loved it! It was a very nice, pleasant afternoon after site-seeing through the town.

We later had dinner at the Tavern Hotel which has a history of its own. In fact, they created a “haunted hamburger” in connection to its haunted history. We sat outside on the patio, just drinking in the energy of the town and tavern.

It had the combination feel of the old and new. It was like being in the wild west again, but with the new creative energy of the artistic community.

Jerome is 5,000 miles above sea level which is almost a mile up, and it hosts some of the most beautiful scenery you’ve ever seen. Even with the spirits roaming the streets at night (And there are spirits), the view is absolutely fabulous, especially at night.

Is Jerome haunted? I know you’ve been patiently waiting to hear about that particular tidbit. Yes, it’s haunted! I ran across a couple of spirits site seeing. I casually asked the owners of those places if there had been any stories by their customers on any strange happenings.

The owners confirmed that there had been and in the locations where I got the impressions. No, I’m not going to tell you where I had the run-ins with the spirits either!

Jerome is one of Arizona’s best-kept secrets. The town has it all if you give it a chance to see it and experience it. It being haunted, as far as I’m concerned, is the icing on the cake.

So … go see Jerome and enjoy the history, the stores, the scenery and the spirits! If you do experience a spirit, drop me a line and I’ll confirm if that’s the place I saw one too.

One event I am still trying to cross off my bucket list? Jerome celebrates Halloween as no other town does. I want to go, and I’m planning to one day. If you beat me to it? Please tell me about it, so I can at least live vicariously through you.

Meanwhile, you go see Jerome and experience the town in all of its glory. New and old energy. Jerome is worth it.