The Scary Fest Continues With More Of The Haunted And Eerie

Are we in the Halloween mood yet?

Well, I’m sure after you read about the next haunted location, you will be.

Arizona has an aura of mystery around its desert. The desert doesn’t tolerate wimps. Harsh unyielding landscape with little or no water is all that is available to the tired, dusty traveler.

The Arizona desert has no sympathy for the lost hiker nor does it care about the lost and lonely traveler. 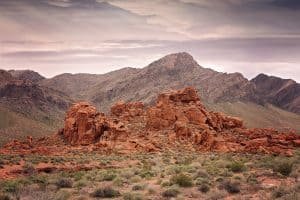 Triple-digit heat and crazy-assed dust storms and severe thunderstorms, where lightning bolts have been known to strike people and/or the ground where one is standing.

Then add scorpions, rattlesnakes, and Gila monsters. Oh my! and it can seem sometimes that Arizona is downright inhospitable.

So, it’s no wonder that she has myths, legends, and spooky stories about her desert.

The longest surviving one is the Lost Dutchman’s mine. 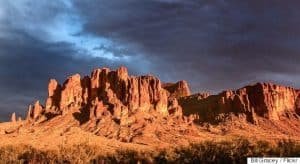 The story goes that in the 1800’s an immigrant by the name of Jacob Waltz was approached by one Mr. Peralta who wanted someone to return to his family mine.

Jacob Waltz and his partner Jacob Weisner joined Mr. Peralta at the mine hidden somewhere in the Superstitious mountains. Peralta offered both Waltz and Weisner a great deal. He gave each of them temporary deeds to the mine.

Now, this is where the story gets spooky. Waltz went into town for supplies while Weisner stayed behind to mine the ore. However, when Waltz came back with the supplies Weisner was dead.

Waltz took what gold he could and hid the rest, creating a crude map of where the mine was located. He then returned to town and apparently, never went back to the mine again.

The Superstitious Mountains has a reputation of its own which only adds to the mystery of the Lost Dutchman’s mine.

Francisco Vasquez de Coronado came north from Mexico in 1540 seeking the legendary “Seven Golden Cities of Cibola”. Although the local tribes told Coronado about the gold, and how the mountains hid tons of it, they were too afraid of the “Thunder God” that hid in the mountains just waiting for the unsuspecting intruder that dared to trespass into his sacred home.

Coronado being brave or an idiot (whichever one you think fits) decided to ignore the savages superstitions and went exploring the mountains on their own.

Then his men began to mysteriously vanish. If one only strayed just a few feet from their companions? They were never seen alive again. In fact, the bodies were discovered mutilated and with their heads cut off.

Coronado had to call it day because the rest of his soldiers refused to go back to the mountain.

It was Coronado who named the collection of peaks, Monte Superstition and the name stuck.

Now what was really interesting is that no one heard anything. The men that vanished mysteriously never made any sound. Not even while they were being mutilated.

Excuse me? If I was being grabbed and mutilated, you know this woman would be screaming her bloody head off.

Yet, these experienced soldiers were whisked away without anyone being the wiser. Makes you think, doesn’t it?

The search for the Lost Dutchman’s mine has claimed hundreds of people over the years with no explanation on who or what killed them.

There were two soldiers who tried their luck, and one of the bodies was found in the nude by the side of the mountain with a bullet in his head. The same for the second soldier. Who shot them? Why were they naked? Another link of mystery for the mine.

Not scared by the fate of the soldiers. Another intrepid seeker Joe Dearing tried his luck only to meet his fate in a cave-in.

Another brave soul Elisha Reevis who was known as the madman of the superstitions, and rumored to run naked through the desert shooting his gun at invisible entities tried his luck too.

His badly decomposing body was found a few feet away from his camp with his head severed from his body, just like the Spanish Conquistadors from a couple of hundred years before.

A year later two easterners tried their luck and were swallowed whole by the desert. Never more to be seen.

Then around 1900, two prospectors; Silverlock and Malm bravely entered the Superstitious mountains with eyes filled with dreams of making it big. Finding the mine and the gold.

In 1910, Malm appeared at the Mormon cooperative in Mesa, babbling incoherently that Silverlock tried to kill him. Poor Silverlock was deemed to be insane and locked away in a mental asylum and Malm? He wound up in a poor house.

The deaths kept piling up from those who didn’t believe and I’ve included the full article for those curious about those deaths.

Arizona has created The Lost Dutchman State Park which tells the stories and history of this haunted site. People go camping and hiking there all the time, and the Superstition Mountains don’t seem to mind the curious and respectful.

However, it has no patience for those still bent on fortune and glory. The most recent victim was Jesse Capen, who was obsessed with finding the Lost Dutchman Mine.

He disappeared in 2009 from the Tonto National Forest. His remains not found until three years later wedged in an impossibly tight crevice 30 feet off the ground.

The Superstitious mountains house some of the most beautiful scenery you have ever seen. She likes visitors and explorers, but she doesn’t like fortune hunters, or is it all coincidence?

Well here is an article where three hikers were found dead as recent as 2017. They too were looking for the Lost Dutchman Mine.

Well kiddies, that’s it for this week. Tune in at the same channel, same station next week for the next haunted Arizona location.

An Open Letter To My Mommy: Thank ...