Whaley House Touted To Be “Most Haunted Place In America”

I don’t know if Whaley House is the most haunted place in America or not, as I haven’t had the pleasure of checking out all of the haunted places. However, I did get a chance to visit Whaley House on two separate occasions. Once in the morning, and once in the evening.

I’m a paranormal freak, and I love haunted places. Over the years I’ve checked out a few. Not in a professional manner, but for personal experience as a psychic. Living in San Diego, my sister, Tracy and I have of course heard about Whaley House. We wanted to check it out for ourselves, and one weekend we did. 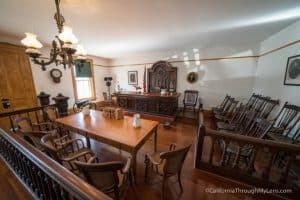 Whaley House has a fascinating history. The property was the site of a hanging. The hanging of Yankee Jim Robinson and even though Thomas Whaley was informed of that, he still bought the property and built his family home there.

Whaley house was a busy place, as the city courthouse headquarters, and housing San Diego’s first theater troupe, and building the first general store. Many generations of Whaley’s lived in this home, and restoration was done to the home to keep it up to modern standards.

It was during the restoration, that weird things began happening which eventually gave the home its haunted reputation.

The entrance leads you down a long hallway, and off to the left is the doorway to the courtroom. It was really cool, and I got a couple of pictures of a huge orb floating over one of the court chairs. Now granted, orbs aren’t evidence of psychic phenomenon, but I thought it was interesting that is was over a chair. 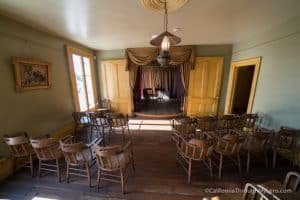 Further into the house, you come upon a staircase that leads up to the first theater ever in San Diego. Now, it was the theater where I first felt energy. It was very strong here, and it was in the theater I first felt like I was being watched. I took some pictures, and I got pictures of orbs on the stage itself.

I was starting to get a headache and feeling sick to my stomach, so I left.  As I went down the stairs to the first level, I got the feeling again, I was being watched.

Halfway down, I turned around and snapped pictures. There was a large orb at the top of the stairs. Coincidence?

Perhaps. Tracy and I, went outside to tour the grounds, and while we were in the backyard, Tracy let out a startled yelp. Spooked already, I jumped. “What the hell?”

Tracy swears she saw a man standing in the bedroom window on the 2nd floor. That matches what other people have witnessed as well.

Is Whaley House haunted? I personally think it is. There were enough coincidences to make me believe that Whaley house is.

The Ghost Adventurers believed it was haunted too because they did an investigation too.

Whaley house is a museum now but is rich in history. A history that cannot help but leave its imprint on the house, and worth seeing if you are in San Diego.

A Deal With Deal Death