No. This article isn’t about the song “Highway to Hell”. Fooled you hahaha.

This Highway to Hell is also known as the former Highway 666 or, the more common nickname, The Devil’s Highway. It’s a 200-mile stretch of road that starts in Monticello, Utah and stretches to Gallup, New Mexico.

It is said to be one of the most haunted places in America. There is nothing along that stretch of road. The desert itself has a natural, spooky aura around it. One definitely feels the effect at night, especially when one is driving alone. 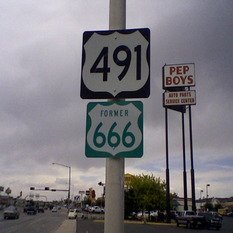 Yet, travelers report some pretty spooky happenings along this deserted highway. There are reports of Native American ghosts appearing in the back seats of vehicles as the driver is whizzing down the road. Some have even claimed that packs of demon dogs with glowing yellow eyes and very sharp teeth harass solitary drivers on the moonlit highway.

Tales of a semi-truck that’s on fire heading straight towards unsuspecting drivers have also been reported along with stories of a young beautiful girl wearing only her nightgown walking down the highway at night.

Enough stories and reports have come from drivers in Arizona that it forced authorities in Arizona to change the name of the Highway from 666 to Highway 191.

Many Arizonians felt that the 666, which in myths is considered the Devil’s number, was attracting all this paranormal activity. They were hoping changing it to 191 would make the activity stop.

Also, according to reported statistics, there were unusually high number of accidents and fatalities for such an open road. Many religious people again thought it was the fact it was originally Highway 666. They were hoping that changing the number would reduce both the accidents and fatalities, as well as the paranormal activity.

In response to the overwhelming complaints about the activity on the highway, the United States renamed the highway to 491. Early statistics after this change reported a decrease in both accidents and paranormal activity.

Many believe that the 666 was what was luring the evil activity to the highway, but now being relabeled as 491, It seems that the highway isn’t as attractive to the devil. Apparently, the highway no longer carries the energy of this number.

The desert is vast and empty. Filled with only plants, brush, sand, and cactus. The desert, by its very nature, commands speculations and it’s so easy for the mind to wander to the unexplained and mysterious. When one is tired and out in the desert alone, can the mind play tricks? Then again, there are way too many reports coming in about the same events. It can’t be totally coincidental.

Plus, changing the number didn’t completely stop the paranormal activity, although it did lessen it considerably. Is that decrease really in response to the number change? Or could it be the number of drivers driving this highway had considerably decreased, because of all of the reports?

The lure of driving down the devil’s highway alone on a moonlit night is very tempting to those who want to see for themselves if the highway is really haunted.

If you’re brave enough to check out the highway yourself, don’t be afraid of the Devil’s Sedan. The Devil’s Sedan is, reportedly, a black sedan that’s likely to ride up to the back end of your car while you are driving alone at night and tailgate you. No matter how fast you speed up, the Devil’s Sedan stays right on you.

Coincidence? Or maybe the hot desert sun is getting to them. Oh, wait. This happens after the sun goes down. My bad.

What Is Your Attitude?