Wes, DeeDee, and Jenna stood in silence, staring up toward the hatch door as Vic closed it, trapping them underground. The metal access panel closed with a loud click and echoed off the subterranean walls. Wes’s jaw dropped, Jenna clenched her teeth, and DeeDee’s breaths quickened. They listened with keen ears for possible dangers within the pitch-black chamber.

The tunnels were silent and notably cold. Jenna wrapped her arms around her body while DeeDee nestled up to Wes for warmth. Unable to fight back the tears, DeeDee began crying into Wes’s shoulder.

“What are we gonna do now?” she asked through her tears.

“Jesus,” Jenna shouted. “Must you cry? It’s not gonna help! I’ll tell ya what we’re gonna do, Miss Crybaby. We’re gonna get the hell out of here, then we’re gonna kick Vic’s ass!”

“Knock it off, Jenna.” Wes rubbed DeeDee’s back. “She’s scared, but she’ll be fine—we’ll all be fine.”

He moved DeeDee closer to Jenna, then forced Jenna’s arm around DeeDee’s waist.

“Hold her,” Wes demanded. “I’ll climb up to check the hatch,” he called over his shoulder as he inched his way toward the ladder.

With both arms outstretched, he swatted at the air until he found the ladder. A slight breeze traveled through the frigid tunnels, causing goosebumps to appear on their shivering bodies. Wes slowly climbed the ladder, making his way toward the access panel. He reached the top and his hands glided around the metal hatch to search for a latch or knob. Nothing. He realized there was no escaping from this way, but kept his frustration to himself.

“I’m coming back down; we’ll find another exit.”

Jenna listened as he descended, then heard his feet slap the pavement when he reached the bottom.

Moans and groans came from their right, and all three friends blindly turned their heads in that direction. The labored sounds of heavy footsteps echoed off the surrounding walls. Something within the darkness approached them. Jenna flinched, and DeeDee’s hand flew to her mouth to stifle a scream.

Vic noticed The Hallows Hotel owner approaching from the entranceway. He dismissed the man dressed as a doctor and ordered him to make sure the tainted punch was properly discarded. He straightened the shirt of his DJ costume then cleared his throat.

“Good evening, Mr. Sergey,” Victor extended a hand to the man donning a black suit with a patterned gold tie and pocket square.

“So,” the stern man spoke with crossed arms. “Did you feed my tunnel creatures?”

Mr. Sergey’s eyes narrowed, and he stepped toward Victor. His temples twitched as he ground his teeth.

“S—Sir,” Victor stuttered. “Your request was for two, but I provided three.” He wiped at the sweat as it trickled down his temple. “Is—is there a problem?”

“You idiot!” He slapped Victor across the face. “Of course there’s a problem. You have overfed my creatures and changed their dietary needs. So, now you must feed them three humans a month instead of two! Otherwise, they will eat each other.”

Victor’s shoulders rounded, and he hung his head down. He stared at the ground, fearful of looking into the businessman’s eyes.

“I spent millions on purchasing this place, and millions more on renovating it. Have you any idea of why I did so?”

“Precisely.” He again crossed his arms. “But, you idiot, they need to be alive in order to be studied. If they die, Victor—” he paused and lowered his voice, “then so do you.”

“Sssshit!” Jenna flinched and took a step backward. “What the hell is that?”

Wes grabbed DeeDee and Jenna by their arms, pulled them toward him, and whispered, “I don’t know, but it’s probably best if we move in the opposite direction—quietly.”

Wes shifted DeeDee to his right, sandwiching her between himself and Jenna. He took several steps to his left and found the cold, cement wall of the tunnel. He slid his left hand alongside the dampened surface, and the three friends inched their way through the darkness. Though progress was slow and cumbersome, the moans and groans grew distant.

DeeDee shivered and wept. “Why does it smell so bad?” she asked through her sniffles.

Wes stopped moving, then turned toward the girls to whisper, “I think the tunnel opens up here because there’s a sharp curve of the wall.”

He suddenly remembered detaching a mini-light from his car keys and had placed it inside the pants of his pirate costume.

“Yes!” he blurted as he reached into his pocket to retrieve it.

Something grabbed Jenna’s right arm and sank its teeth deep into her flesh. Her scream pierced the air.

Wes aimed the mini-light toward a screaming Jenna and flicked it on. His stomach sank at the sight of a zombie-like creature latched onto his friend. The gray-faced beast possessed large eyes, devoid of color. Its expansive opaque pupils revealed revolting, immoral beings. 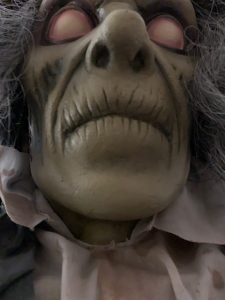 Moaning and growling, it continued to gnaw on the bloodied flesh of Jenna’s arm. DeeDee refused to look at the unknown threat. She hovered against the wall, and tucked her face into her hands, muffling her cries of fear.

Wes raised his arm to gain momentum to shove the creature away from Jenna, but a second zombie appeared and his thrust met air. The monster sank its mouth into Jenna’s neck and the two beasts yanked her away. They dragged her lifeless body toward another darkened tunnelway.

“Jenna,” Wes called out then dropped to his knees.

Wes took in a deep breath, then stood. “DeeDee, we need to keep searching for an exit. It’s really important that we remain quiet.”

DeeDee’s body shook. She removed her hands from her face and looked at Wes, who shined the dim light under his chin to illuminate his face.

“Okay,” she said, stepping toward him.

A shadow moved behind Wes, and DeeDee shifted her gaze toward it in time to see a zombie thing sink its teeth into her friend’s head. Wes punched at the creature, but his strength was no match for the gray-skinned beast.

Wes’s warning was cut off. He fell silent—except for the thud of his body dropping onto the cement flooring, and the echo it created within the darkness.

“NOOOO!” DeeDee screamed and ran. “Somebody, help me!”

Lost in the subterranean tunnels, DeeDee flailed and hyperventilated as she moved in an unknown direction. She wobbled and staggered right into the arms of a carnivorous creature. She looked upward, and the beast’s mouth came down onto her face.

Victor composed himself after Mr. Sergey vacated the room. He rolled his shoulders then cracked his knuckles. Numerous workers hustled throughout the room, working and cleaning to rid the Halloween decorations. His eyes came to rest on the DJ’s microphone, so he strolled over toward it and grabbed the mike.

“Okay, everybody,” Victor announced. “Let’s get everything cleaned up. We’ll meet in the conference room on Monday morning to start planning our Thanksgiving extravaganza.”

He started to set the mike down then brought it back to his mouth. “Oh, and we’ll now need three viable food sources every month.”

Victor went back to work—business as usual.

A Review Of The Great Library Series