Haunted Myths And Legends For Halloween

It’s October woo hoo! October and Halloween is probably my most favorite time of the year. Before I moved to the desert of Arizona, I lived on the east coast. The leaves turned the most amazing shades of crimson, orange, and yellows.

The temps became cooler and the night air was crisp and clean. The stars seemed closer to me as they sparkled at me from the heavens. I could feel the magic of the month.

Especially, as the days of October crept each day that much closer to me until it was finally Halloween.

I love horror movies, haunted houses, and anything to do with scary. It just seemed that the aura of the month fit the haunted elements that make up Halloween.

All Hallows Eve or Halloween as it became known later in history is the day that marks the final harvest celebration. The last of the crops are gathered and stored for winter.

The ancient Celts began the celebration of Halloween as a way to celebrate the final harvest. It was now time for fun and celebration. They partied with large amounts of food, dancing, singing, and storytelling.

They wore masks to keep away ghosts, spirits, and generally evil itself. It was a time of relaxation from a year of hard work.

Halloween is also known as the time when the veil between the spirits and living is the thinnest. Allowing spirits a one time opportunity to cross over to the land of the living and interact with us.

It is a time to remember our past, where we came from, and how we are still connected to our ancestors. A time when the spirits of our ancestors could join with us. It was a time of reflection.

The tales and stories of ghosts and spirits walking the land, told by the ancient bards, eventually became local myths and stories that would entertain generations to come.

At the same time, there is always some truth to these myths and legends. They had to have gotten their start somewhere, right?

Evil people that practiced black magic, creepy witches lying in wait for innocent children straying from their homes. Stories of Werewolves and vampires were prevalent. Children were told these stories as a way to make them behave and listen to their parents or were they?

Arizona itself has hundreds of stories and myths that live in the desert that are perfect for Halloween. This got me thinking. What better way to celebrate Halloween then to retell these stories and myths, as I now live in Arizona.

So, without further adieu, I’m going to start the October scary fest with one of the most popular story. The myth of the Navajo Skin walkers. 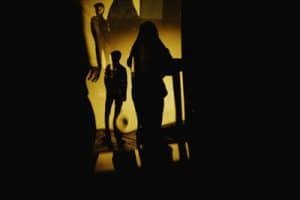 Legend has it that skin walkers were evil medicine men who, wanting power and prestige, killed someone in their the immediate family. Someone that was close and important to them to make their sacrifice even more powerful.

Supposedly, spilling the blood of a loved one gave them supernatural powers. Powers to kill people or bewitch  them. They also had the power to skulk around in the darkness as animals that stalked their prey.

They could shapeshift into coyotes, owls, wolves, and even bears. The most common form they took is the shape of a coyote or dog-like creature.

It is why the Navajos are leery of the coyote. If one crosses in front of you? You have to go back to your place of origin and start your trip again.

The skin walker story is so powerful that, even today, a majority of the Dine’ people believe they exist. Some even swear that they have seen or heard the skin walker themselves.

I have a friend who is Navajo, and he has land up north near Antelope Lake, Arizona. Members of his family continually tell him that there is a skin walker that roams that land.

They warn him every time he goes home to be careful of the skin walker. Now, Michael himself hasn’t seen it. The couple of times I’ve been with him up there, I haven’t seen it either.

The land though, is very remote and way off the beaten track. At night, you can see the Milky Way in all its glory. Nothing around you for miles. You are completely alone and isolated. I won’t lie. It is definitely, a very spooky place.

I wouldn’t want to be walking around that land by myself, no matter how beautiful it is at night. No way in Hell.

As a believer in the paranormal, I wouldn’t be a bit surprised if there was something supernatural happening up there miles away from civilization. It has all the markings of a haunted place.

So, if you ever find yourself driving the roads of Arizona at night? If you see a coyote cross your path? Turn around and go back to where you started, because it could very well be a skin walker.

Cyberbullying And Thirteen Reasons Why