Debbie haphazardly parked her SUV in the middle of the curvy canyon road. She jumped out and sprinted toward the edge of the ravine. Her heart threatened to burst from her chest as she caught sight of her son’s crashed motorcycle. She peered twenty feet downward and scanned the rocky depths for her son, Jake. Tossed over the edge, he landed on the boulders below.

The steep hillside, combined with a myriad of rescuers, prevented a clear view of her son. Debbie could only listen to the surrounding crowd and rescue workers as they discussed details of the accident. She examined the many rescuers’ faces and body mannerisms for signs of urgency.

A conversation of the accident from gawkers on her left drew her attention. She listened but refused to turn toward them.

“He leaned too far into the last bend, and his footrest scraped the pavement.”

“Well, his pedal didn’t retract, which is what caused him to skid then fly over the edge,” said another man.

A rescue worker off to her right spoke to another rescuer. “If that bike had rolled down there with him, it would have crushed him.” 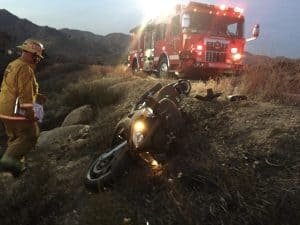 Debbie’s heart pounded, and her stomach churned. She fought the urge to descend into the abyss to reach her son. Damn it, Jake. I told you motorcycles are dangerous!

Debbie noticed a police officer standing nearby with a notepad and a pen in his hands. He alternated between speaking with the rescuers, instructing passersby, and jotting information into his notebook. She realized he must be in charge of the scene and headed toward him.

“Is he ok? What’s taking so long?” Debbie probed. She refused to look into his eyes for fear of what they might reveal. Instead, she focused on his small mouth as he spoke.

The poised officer explained that besides his severe road rash, Jake likely had several broken ribs.

Debbie clenched her teeth. Her mind wandered to the possibility–the probability for more internal injuries.

The officer interrupted her thoughts. “…and we’re waiting for another fire truck that has a special ladder to assist with the difficult extraction.”

Debbie managed a slight nod then turned and walked away to seek a better vantage point.

The sun began to fade, but the number of spectators continued to swell. Debbie gulped and struggled to suppress tears that brimmed in her eyes. Allowing the release of a single tear meant the opening of panic’s floodgates.

Each time her eyes fell upon the mangled motorcycle, they threatened to spill over. Scattered debris surrounded the downed bike. It no longer resembled Jake’s vehicle. Instead, it could be a prop from a movie’s horrific crash scene. She turned her face away and crossed her arms over her chest.

A deep roar sounded in the distance, and Debbie exhaled. She realized the fire engine with the necessary equipment was approaching. She gazed in the direction of the truck’s melodic rumble. It carried the answer to her prayers–the weapon to free her son from the grips of the ravine.

The fireman parked the truck alongside the curb. Several men maneuvered the large ladder down into the ravine. Debbie marveled at the unflustered rescuers, starkly juxtaposed from her unraveled self.

A stretcher, secured to the sizeable ladder, descended into the canyon at a slow speed. Debbie’s hand sprang to cover her mouth. Please, please, please let him be ok!

Darkness had fallen. The many rescue vehicles’ lights illuminated the hills, but not the sight of her injured son. Anxious and waiting, Debbie struggled to fight the surging panic. The impressive crowd of fascinated onlookers continued to point and murmur.

The tip of the stretcher became visible. Debbie froze, and her mouth fell wide open. She watched as the rescuers struggled and stumbled their way up the hill. They clung to the side of the litter as they ascended, and managed to haul Jake to the surface. Debbie’s eyes finally had sight of Jake, but her weak legs remained motionless. 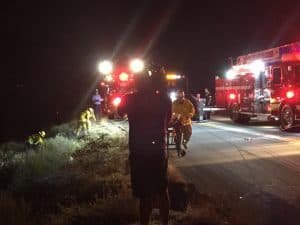 A paramedic gave her a verbal nudge. “It’s ok. You can come over to see him for a minute.”

Dazed, she staggered toward her son. Her eyes rushed to his face. His pain was evident, as was something else. Her face, devoid of color, turned toward the paramedic.

She opened her mouth to speak. “You…you’ve called the wrong mother. That’s not my Jake.”

The thunderous roar of Jake’s motorcycle approached the accident scene. He waved to his mom as he zoomed past her.

Relieved, but forever scarred, Debbie walked toward her SUV. She surrendered to the floodgates; tears cascaded down her cheeks.

*Author’s side note: This story is based on a real-life accident. Proper motorcycle gear and helmets save lives. Though my son ended up with a broken wrist, three broken ribs, a lacerated spleen, and severe road rash–he lived. He’s okay–because of his gear. So, please remember the importance of investing in proper equipment. Or, better yet, don’t buy a motorcycle!

Here Be Dragons-The Lore Of The Great ...