Staring out her bedroom window, an ominous feeling grew in the pit of Anna’s stomach. She looked at the scene before her. Menacing flames from a recent forest fire threatened her residential community, but firefighters saved all homes. However, the inferno scorched nearby hillsides and distant mountains, leaving thousands of acres consumed from its feeding frenzy. The view beyond Anna’s backyard now resembles a horror movie. Halloween trees stem from a blackened blanket, depicting evil’s deliverance.

Adding to Anna’s unease is the location of the horrific fire’s dawning. Deep within Wickedvale’s ancient cemetery grounds, an area seldom visited, is the wildfire’s origins. Dating back longer than anyone can pinpoint are copious amounts of rumored hauntings. Residents in several nearby towns have created a petition for the removal of the older portion of the cemetery. Reports of muffled screams and glowing eyes peering out from its darkest corners are among a few of the reasons. Others speak of gravestones with tears of blood, shadowy figures, and apparitions. More recently, rumors of swaying tree limbs on windless, still nights surfaced in the weeks leading up to the fire.

Seventeen-year-old Anna knew another fretful night lay ahead. She liked it better when talk of hauntings were rumors. It created many fun slumber parties with her girlfriends over the years. Now, however, things have gotten real. Nighttime brings scratching noises outside her bedroom window. She’s awakened every night by feelings of something evil. Mini clouds materialize from her warm exhales as they meet fallen temperatures.

Sighing, she closed the shutters then set out to brush her teeth. Her parents, consumed by the local nightly news, gave a muted response to her goodnight wishes. She turned and headed back down the hallway toward the bathroom and bedrooms. Anna then slipped in to check on her little brother, seven-year-old Luke. His sleeping capabilities never ceased to amaze her. Glancing at her dozing brother with his Sock Monkey teddy bear nestled in his arms brought a smile to her face. She leaned down, pushed his red hair aside, then kissed his forehead.

Anna closed Luke’s door on her way out, then stepped across the hallway to enter her bedroom. Once inside, she stood with her back placed against the door. Tense, she scanned her room for anything unusual. To her right, her eyes fell upon the unmade bed. Nothing unusual about that. She then looked toward the window, across from her. Anna’s stomach sank. The shutters she had closed were now slightly parted. Her breathing quickened. Anna forced herself to walk toward the window. She opened the shutters to inspect the yard and hillside beyond. Halloween trees seemed to taunt her with their leafless limbs and misshapen appearance.

Movement grabbed her attention. Squinting to sharpen her vision, she noticed a large limb on one of the blackened trees moving. Anna stared at it, trying to make sense of such a considerable branch capable of blowing in the wind. Unsure of whether her weary eyes were playing tricks, she continued to focus on it. It swung back and forth, then pointed a charred finger in her direction, causing her to gasp. No, no, no! I must be seeing things! Anna slammed the shutters, making sure they were closed, then ran to her bed. She pulled the covers up to her neck. The nightly scratching noises returned to her window, then grew louder than any other night. Adding to her misery was a tapping noise on the outside wall, to the right of the window. What the hell is that? Frightened, she struggled to slow her heart rate.

A large black spider moved its grotesque legs in the corner of the wall, near the tapping noise. I HATE spiders! Of all nights for one to show up in my room! Concerned the tapping would cause the spider to move toward her, she sat up to look for an object to swat at it. With no luck of finding anything useful, she looked back at the hideous spider. Frowning, Anna realized it wasn’t a spider all at. It was a charred branch with finger-like extensions advancing into her room. She opened her mouth to scream but fell silent when its pointy tips sprayed black smoke into her room. Unable to scream or move, she watched. More charred tentacles continued to advance into her room. It reached her toes and coiled around her feet like a serpent. It slithered up her legs and around her midsection. With a firm grasp, the evil entity shifted Anna’s body and forced her to face the bedroom door.

Additional branches moved toward her bedroom door and created a circular opening. It glided through the hole and slithered into the hallway. Anna shifted her eyes. She looked to her right and realized the tree was no longer advancing into her room. She then looked back toward her door and felt a slight relief when she realized the invasive branches appeared to be retreating from the hallway. But her moment of relief vanished when she spotted an object within the tree’s grasp.

The giant tree held Luke inside its coils. The young boy, sound asleep, clutched his Sock Monkey teddy bear. Anna’s heart threatened to pound its way out of her chest. She shifted her eyes toward the area where the tree had gained entrance and noticed a new hole forming. Desperate to grab ahold of Luke’s body, she willed her arms to move. Rendered useless, tears pooled in her eyes, blurring her vision until they spilled down her face. The tree creature slipped outside with her brother in its grasp. It pointed a few burnt twigs at her and shot another dose of black smoke into the room. The tree released its grip, and she fell to the bed. Extreme grogginess set in. She fought hard to remain awake, but lost the battle and surrendered to a deep sleep.

In the days that followed, heartache consumed her to the core. Trying to grasp that her nightmare was a reality submerged her with sadness. No one believed her story about how Luke had disappeared. They assumed someone had broken in and abducted him. Anna took it upon herself to survey the area where the fire began. She drove to the cemetery and walked in through the opened iron gates. Anna hiked for a while to reach the back. The scenery changed. Scant daylight penetrated the thick canopy of trees, obscuring older and scattered tombstones. Anna arrived at the dark scar and examined it. She determined the wildfire moved away from Wickedvale’s front, leaving it unscathed. It wanted to blaze a path toward the distant residential neighborhood.

Anna stopped to glance at the innumerable amount of charred trees that lay ahead. Black to her left, black in front of her, and black to her right… except for one tree. The only tree with red on its trunk. The charred trunk possessed unusual amounts of red. Red, like Luke’s hair. Her jaw dropped. Luke! Gazing at the tree, she spotted something resting upon one of its branches. Anna sprinted toward it.

About ten feet from the multicolored tree, she halted. On the branch lay Luke’s Sock Monkey teddy bear. Anna’s legs gave out, and she dropped to the ground, crying. No one will ever believe her, but she knows Luke is now one with the tree. Deciding she will visit her brother every week, she forced herself up and stepped closer. Anna wiped a tear from her cheek, then reached up to secure Sock Monkey to the branch. “Now you won’t lose your teddy, Luke.” 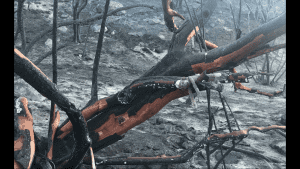